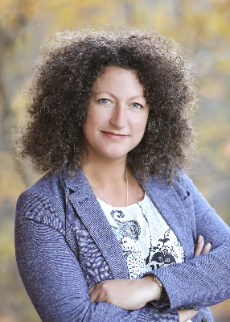 Dominique Germain holds a master’s degree in social work from the University of Ottawa. She has 20 years of professional experience in social work, including mental health, addiction, crisis intervention, counseling, risk and threat assessment, sexual abuse and truancy. During her career, Ms. Germain has not only worked in child protection and as a social worker, she has also been a member of the City of Ottawa Emergency Response Team, was Lead on multidisciplinary intervention teams, liaison with the Ottawa Police, CHEO, Royal Ottawa and Montfort all the while leading a team of social workers and teaching part time in the Social Service Worker program at Collège La Cité.   In 2014, Ms. Germain became a permanent professor in this program and was soon appointed program coordinator. In 2017, she won the position of Director of the Institute of Emergency and Legal Services at Collège La Cité.

Over the years, Ms. Germain has continued to be highly involved in the community: she is a past United Way volunteer, 10 year member of the Suicide Prevention Network Steering Committee, 8 year member of the Ottawa Urban Schools Steering Committee, active member of the First Responders Mental Health Council, active administrator for Montfort Renaissance, active member of the Montfort Hospital Association and current vice-president of the Canadian Association of Police Educators. Dominique is a strong advocate for education and mental health and believes in being the voice for those who do not have one. Her ambitions, career and volunteer work, combined with 3 young adult children at home all pursuing post-secondary studies, keep this dynamic francophone woman on her toes!